Anytime I go to the city I try and find another gluten free bakery, and I found this one by chance, and I didn’t believe it was gluten free. When you go to the shop there is nothing there that says “Hey, we are gluten free!” So, I was really skeptical because everything looks amazing in there! But when you go to Posh Pop Bakeshop’s website the gluten free message is big as life!

I believe this works to their benefit. Here’s why.

Posh Pop Bakeshop is located in the West Village of NYC and there is a ton of foot traffic. Some people who can eat gluten avoid places that are gluten free because they are convinced that they won’t taste the same, or that gluten free baked goods taste horrible. Which, let’s be honest, has really been the case up until just recently.

Posh Pop Bakeshop’s style will entice anybody that walks by! They really have a beautiful aesthetic. The look of their place makes you step through the door, but that lovely smell makes you want to live in their bakeshop forever!

If there’s no giant sign that says everything is gluten free all walks of life will walk in, they’ll be enjoying, unbeknownst to them, really great gluten free treats.

I believe this won’t hurt Posh Pop Bakeshop regarding the gluten free crowd because people like me, the celiac and gluten sensitive, researches to the nine to find good gluten free bakeries before we step foot outside to start the journey to these places. We can’t just go out and walk into any bakery.

During this time of quarantine I was able to order from them and have their goods shipped to me! I took advantage of this as I’m not heading into the city anytime soon. While I ordered through shipping I have been to the physical location as well.

My order and Shipping

Ordering on the website was pretty easy, but like Senza Gluten if I wanted something I was ordering in quantities of 4. Which is okay with me because you can freeze the goodies for later. And this also makes sense for them as well on a business stand point.

My shipping was free! But these treats were a bit more expensive than I would have liked.  Any order over $35 is given free shipping, and I can’t say that about too many places. Good on them!

But they didn’t ship their good frozen. This may have been their biggest mistake. More on that later.

The box and the look of everything was very pretty! Each item was packed individually in a plastic adhesive sleeves. I loved how they packed it in the pink confetti paper. They definitely stayed on brand! 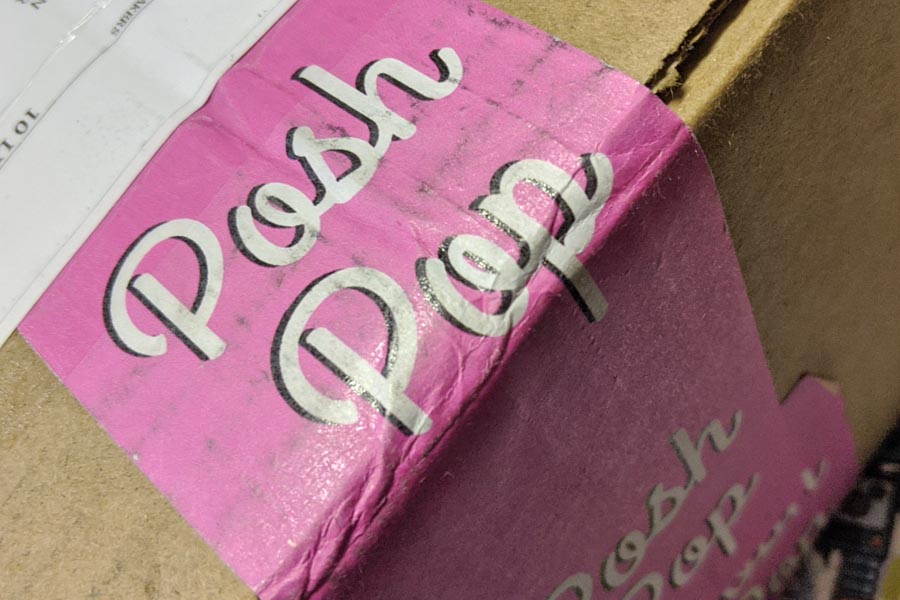 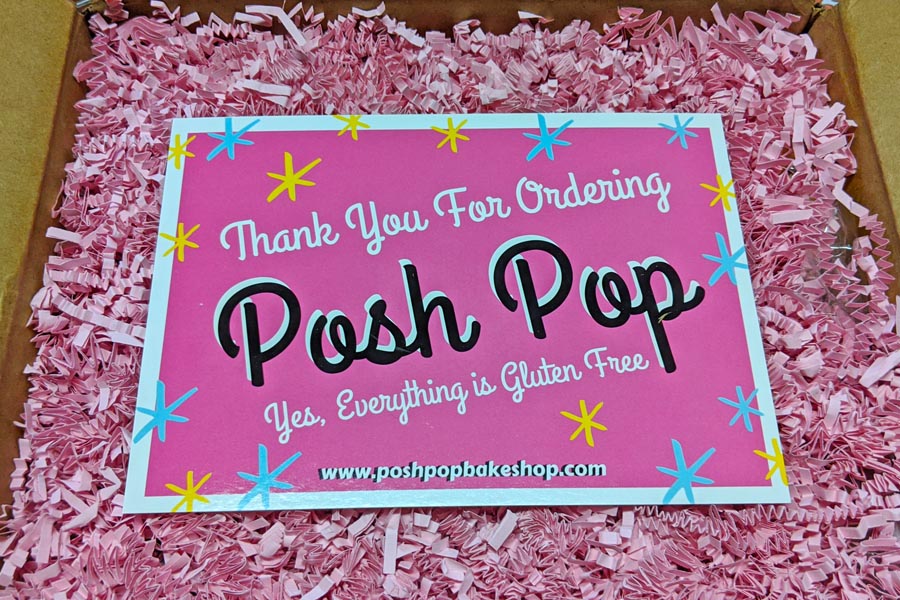 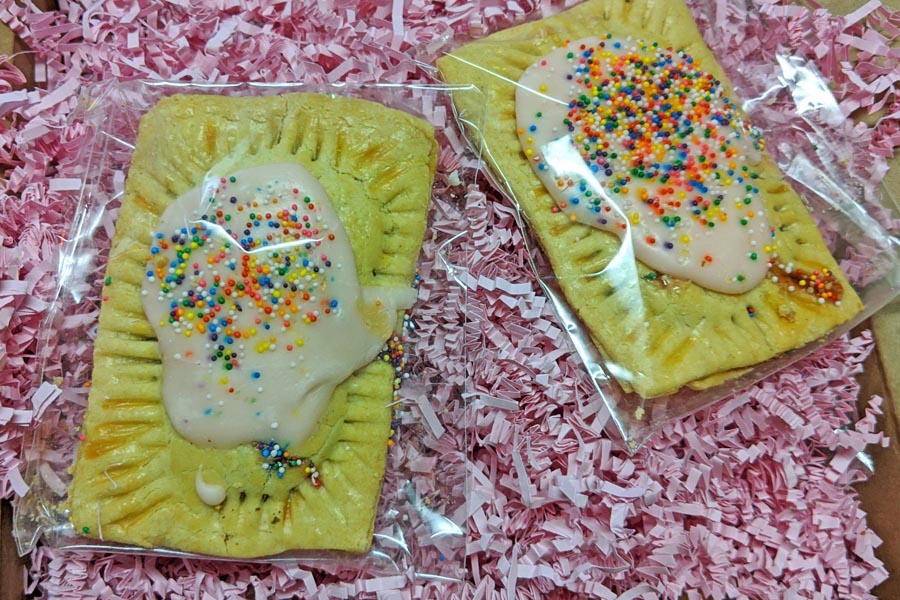 This is one of the fan favorites for Posh Pop Bakeshop. The size of them is a good little bundt cake. Unfortunately, the bread was a little hard on the inside. I want to blame how it was shipped. I don’t think shipping without an airtight seal benefited them at all, also would freezing them prior to shipping help? Probably.

The overall taste was good! I love how it comes apart like a good monkey bread is supposed to 🙂 It really is a fun treat. Texture was good as well. They do alright a few days later out of the freezer. They were quite delicious and warm! 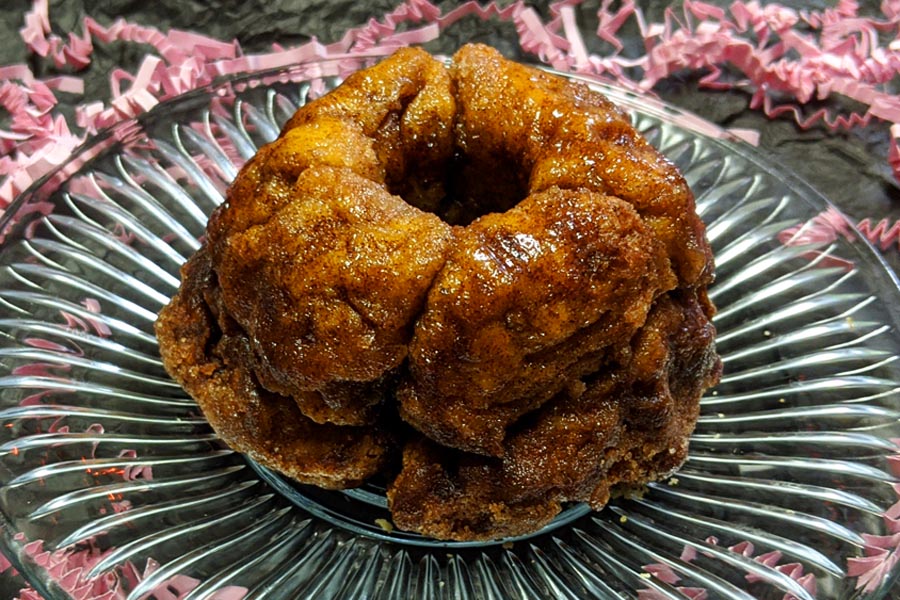 These guys had me on the fence. While I appreciate the idea of making a gluten free pop tart, they just did not deliver. These were veeeeeeery sweet. Too sweet. They also fell apart right out of the packaging. It was very hard to even get a good picture of them. It was more a pastry dough than a bread like dough which I don’t think was quite right for these.

These things were pretty big! They don’t shy away from a good sized portion that’s for sure. I also think the presentation of these could have been better. A little more care into the design would be good.

I, sadly, was not a fan. Now, I have 3 of these sitting in my freezer. :-/ These, I think we’re just too ambitious to tackle on a gluten free basis. 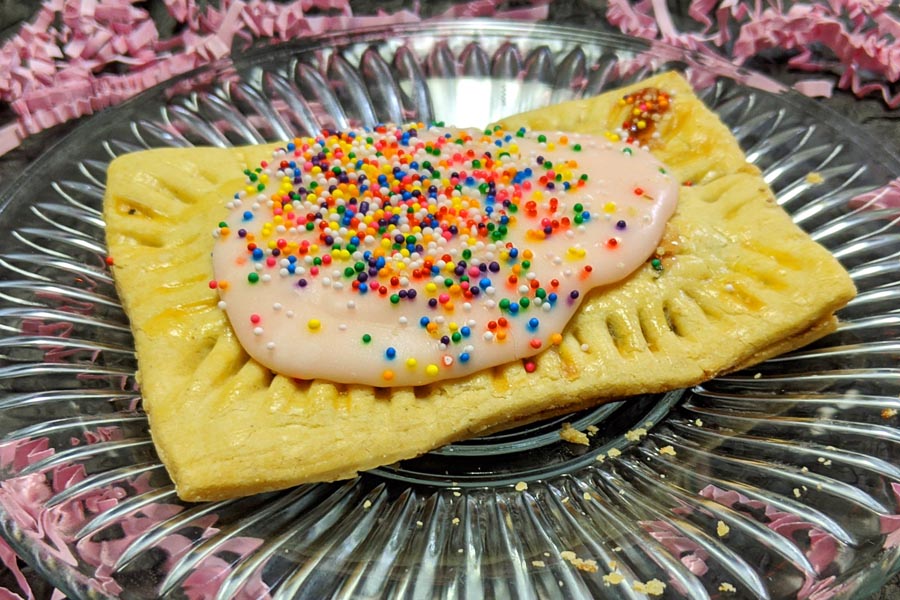 These also weren’t a winner. This pains me to keep saying this about their baked goods because I’ve had such great things from Posh Pop Bakeshop. This brownie fell apart, and I didn’t really taste any of the peanut butter at all. Maybe it was too subtle? These were a bit too dry as well. Which, again, can be attributed to the way they were shipped.

One thing I can say is that the taste of the chocolate was great. A very robust, rich chocolate flavor, I just wish I was able to have a more chewy brownie. I know this is very hard to achieve when it comes to creating vegan baked goods. So, a very ambitious attempt again. 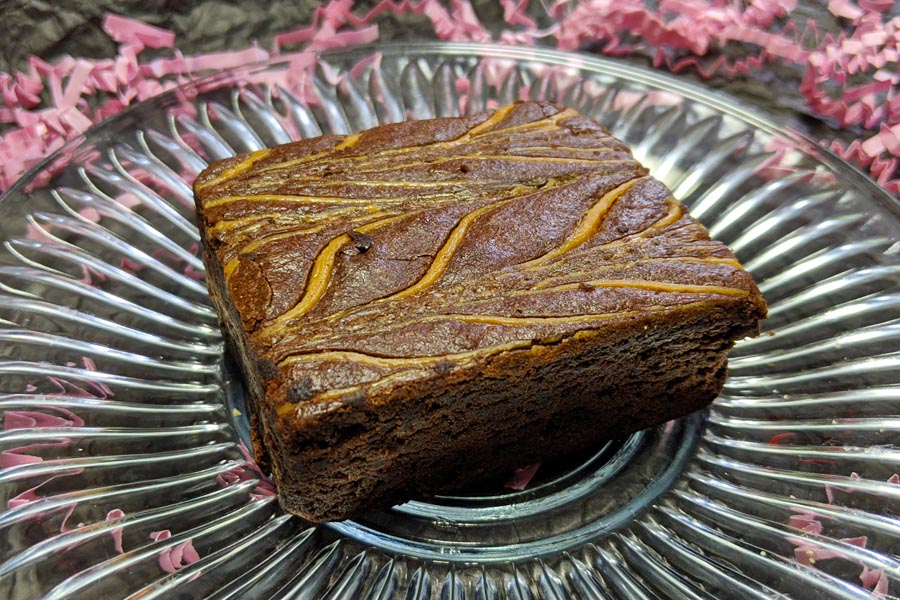 I love anything s’mores! These included. Posh Pop Bakeshop’s cookies are insanely big, and these are no exception! It would take me a few days to eat a whole one. Definitely for sharing.

It’s basically a giant chocolate chip cookie with marshmallow in the middle. I love the idea of this and it feeds the cookie craving. They could have put as much marshmallow as they wanted and I would find it acceptable, no matter how much!

It was nice and chewy! 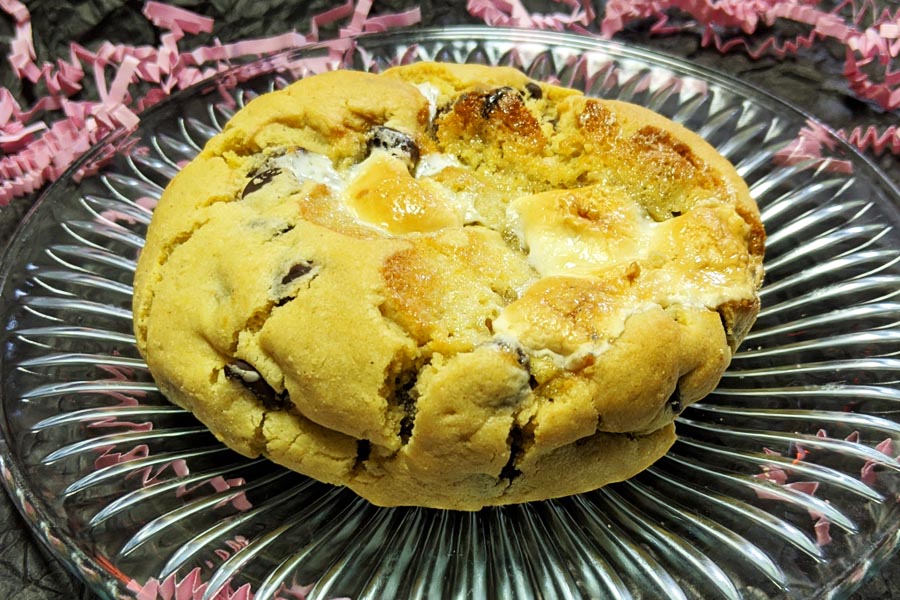 If I base my review on not just the shipped goods, but also on the items I’ve had in the past right from the shop they do get a better rating. I was fairly disappointed in what was shipped to me, but I’ve loved everything I’ve gotten from there visiting the shop itself. I purposely ordered things I haven’t had from here before.

I’ve had the cinnamon rolls. And I loved them! They make their rolls with the cream cheese frosting. I’m not a fan of that, but I know that’s the most popular with cinnamon rolls. So, I accept it.

I’ve also had their hazelnut cinnamon rolls – I love these even more than the regular cinnamon rolls because they taste similar to the cinnamon rolls, but they have a classic, reminds-me-of-my-mother’s-glaze, on the rolls.

When I can get baked goods from here, I do. All the time! I think they’re victim to insufficient shipping methods unfortunately that degrade their product quite a bit.

I’ve even ordered cake pops from there for Valentine’s day for my husband and he loved them! They never have disappointed until I got the order in the mail. 🙁

I mean, as a gluten free bakery they really are a step above the rest in what they offer. I really appreciate how they continuously try to make new treats, they get creative. And I love that. They raise the bar for gluten free bakeries everywhere.

It’s not just them trying to deliver a gluten free chocolate chip cookie, they’re giving you some glamorous desserts. You know they put a lot of thought in to what they want to offer their customers.

I have to give them 4 out of 5 overall. I feel like based on what was shipped to me it isn’t fair to give them a rating just on that. If I were to just base it off of that they would be getting a 1 out of 5. If I had never been to their shop prior to getting my order they would have been stuck with that.

Definitely try out Posh Pop Bakeshop if you find yourself in NYC. They are worth the visit. Just being in there makes you feel euphoric! It’s still one of my favorite gluten free bakeries in NYC.

Yosemite Half Marathon: My Road Trip Adventure
How Good are the Gluten Free Treats from Senza Gluten?
Review of the Completely Gluten Free Krumville Bake Shop
Who Makes The Best Gluten Free Bagel in NYC?